Yesterday, I did a bit of how-to and analysis in one post for open play passing stats in the NWSL 2016 season – at least for the matches for which we have location data (40 out of 103, as of this writing, to be exact).

Now, I’m going to work with the same dataset in combination with the NWSL 2016 rosters database we’ve got to look at a very statistically interesting type of player – the fullback. We’ll focus one highly productive example – the Washington Spirit’s Ali Krieger, one of the fullbacks in our dataset with the most open play passes attempted per 90 minutes. We’ll look at how their passing and defensive responsibilities change in each third.

The following visualizations and data are all available to interact with and download from this Tableau visualization. All the data can be calculated from our WoSo Stats GitHub repo by following the instructions in yesterday’s post for how to use the R code I’ve created.

The following data is also only for 40 out of 103 NWSL 2016 matches that we’ve logged with complete location data. To see the list of matches this data represents, see the database in the WoSo Stats Github and look for all the matches with “yes” in the “location.complete” column.

Open Play Pass Attempts by Thirds of the Field

Let’s look again at this chart from yesterday- it’s all players with a minimum of 270 minutes logged with location data by the WoSo Stats project, sorted by open play pass attempts per 90, and broken down by what third of the field a player’s passes originated.

Takes just a little bit of mental math to notice that out of all the defenders up here, the two with a noticeably higher percentage of pass attempts in the attacking 3rd are O’Hara and Krieger. Those of you who follow the sport will know why – they’re both fullbacks, asked to join the attack much more often than their counterparts at centerback.

Now, using the rosters database, let’s filter out anyone who isn’t a defender.

Sticking with these passing stats one more time before we delve into other stats, I duplicated the chart above, but I filtered out anyone who isn’t a defender. And now the stacked bar charts represent the percentage of all passing attempts that were within each third of the field. In other words, we’re now looking at defenders passing attempts, now broken down by what percentage was in each third. I sorted the following by percentage of passes in the attacking 3rd, so the defenders with the highest percentage of passes in the attacking 3rd are at the top.

The top, for those of you familiar with the NWSL 2016 season, is full of fullbacks. Pickett, Reed, Catley, Gilliland, Hinkle, they’re all there. Reed and Pickett, the two Seattle players visible here, are notably the only defenders with more than 25% of their pass attempts in the attacking 3rd. Further down the chart, we run into more defenders who were shuffled between the fullback and centerback role throughout the matches we’ve logged, and then more and more centerbacks.

There’s a lot of different things we could look at with regards to passing stats. How is Krieger passing the ball out of her defensive 3rd, relative to other defenders? What’s she doing in the midfield with over 60% of her pass attempts? And what’s going on with those 18.8% of passes in the attacking 3rd compared to everyone who’s above her – and below her?

Recall from yesterday’s post that the median open play passing completion percentage in this 3rd of the field for all players was 60.6%. Krieger’s is 65.4%.

Defending in the Middle and Defensive 3rd

Now let’s turn to defending stats. I started off with what in the stats table are called “possession disruptions,” – successful tackles and dispossessions of the opponent. That is, instances where a defender was attempting to go 1 on 1 with an opponent and strip the ball away. Below is a chart for all defenders with at least 270 minutes logged with location data, sorted by opponent possessions disrupted per 90 minutes, and broken down by what third of the field they were in.

Krieger doesn’t even show up in this list. She’s down below in the middle of the pack, not even getting more than two opposing possessions disrupted per 90.

But there’s more than one way to defend and her contribution to defense is much more apparent when we look at a different type of defending stats – “ball disruptions.” That is, interceptions, blocks, and clearances of the opponent’s ball – usually a pass attempt. Below is a chart for all defenders with at least 270 minutes logged with location data, sorted the players by ball disruptions per 90 minutes, and broke it down by what third of the field they were in.

Krieger is not only up there at #3, but she’s also surrounded by mostly centerbacks.

Now let’s look at those disruptions in the attacking 3rd and middle 3rd, broken down by whether they were interceptions, blocks, or clearances.

Krieger is also out of the top 15 when we look at ball disruptions in the defensive 3rd, but in the middle 3rd she’s ridiculously ahead of every other defender. Even when I included all players, not just defenders, in this visualization, she was still far and away the top of the list. 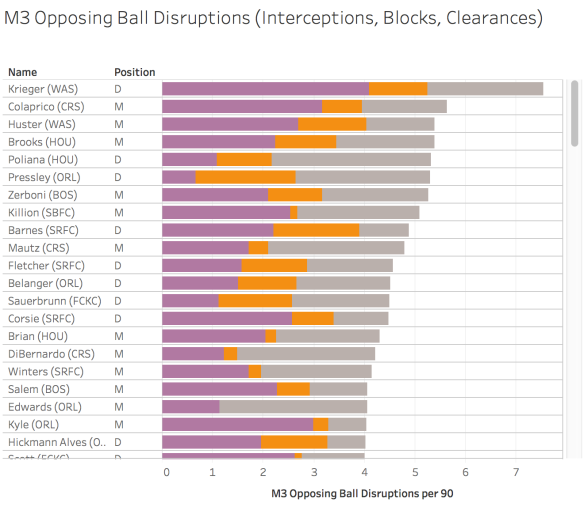 The number of interceptions per 90 minutes, 4.1, that Krieger gets by themselves are higher than all ball disruptions for some players. I personally think extremely highly of interceptions, as they’re instances when a defending player not only stops the ball but wins clear possession of it – essentially getting credit for a turnover in possession. To get them that high up the pitch compared to every other player might not just make her a good defender, it can also make her a dangerous attacker.

We need your help!

As was noted above, this is only 40 matches out of a 103-game NWSL 2016 season. The WoSo Stats project desperately needs your help to log more basic stats and location data for the 2016 season. The more data we get, the better we’ll understand the sport.