Thanks to the hard work of many volunteers and WoSo fans who have contributed their time to the WoSo Stats Project, we have several matches with location data. The way this project tracks matches means that virtually every action (passes, tackles, pressuring an opponent, lost touches, etc.) has its location on the field logged according to this field breakdown.

The possibilities this creates for analyzing play on the field are numerous. However, logging location data on top of logging the match actions themselves is very time-consuming, so every match has its actions logged first and then location data is added after the fact. This means that only a portion of matches in our database have location data logged, but at this point we have enough matches completely logged that we can start to do some interesting things.

In this post I’ll show how you can use Excel spreadsheets to create heat maps for some of the data we’ve logged. This is just the beginning, but some of this is neat enough to show off already. To keep things focused, I also will show heat maps just for Tobin Heath for her April 2016 Portland Thorns matches.

How the heat maps work

The heat maps featured in this post are in an Excel spreadsheet that can be downloaded from the WoSo Stats GitHub repository (click on “View Raw” to download it). A more in-depth post will follow on how these heat maps function and how you can create your own for any match in our database with location data, but for now it’s important to keep in mind what stats these heat maps depict, how the color gradients are scaled, and just in general how to use them without accidentally breaking the whole thing.

In the Excel spreadsheet, all the data that can be represented on the heat map is in the large table to the right. Don’t mess with this! Each column in that large table is for a given stat in a given zone of the field.

The actual stats I’ve chosen for these heat maps are the following, with a description for what each acronym means listed below:

More detail on some of the above stats and how they’re logged can be found here.

A note on how the color gradient works. For the sake of simplicity, for now, in this Excel spreadsheet the minimum (white) is always 0 and the maximum for each stat (darkest green) is the largest number out of all the zones for all the players. For example, for the Portland Thorns vs. Orlando Pride match above for the opPass.Att stat, Emily Sonnett had the most open play passes attempted from any one zone, with 20 open play passes attempted from the center of the defensive 3rd (DC). So, that’s the maximum for the opPass.Att stat. The same logic holds true for all the other stats.

I’ve got formulas in the Excel spreadsheet to also account for finding the maximum for a team overall, as you can also just type in the team acronym in the cell under the “Enter name here:”

If you’ve already downloaded the Excel spreadsheet, you’ve hopefully noticed you can create heat maps for the three NWSL matches in there for any of the players who played. However, I’m just going to spend the rest of this post looking through the stats for Tobin Heath, as she was voted the Player of the Month by NWSL Media for that month of April. That Tobin Heath is a great player who had a great start to the season, well, that’s not something for which you really need a heat map. But the following will be fun to see how Heath’s passing and take ons were distributed across the field, especially compared to other players.

The first thing that stood out to me for this match was the distribution of Heath’s passing across a large swath of the field. Her heat map for her open play passing attempts (opPass.Att) is light green, but there’s a lot of light green especially in the opponent’s half. 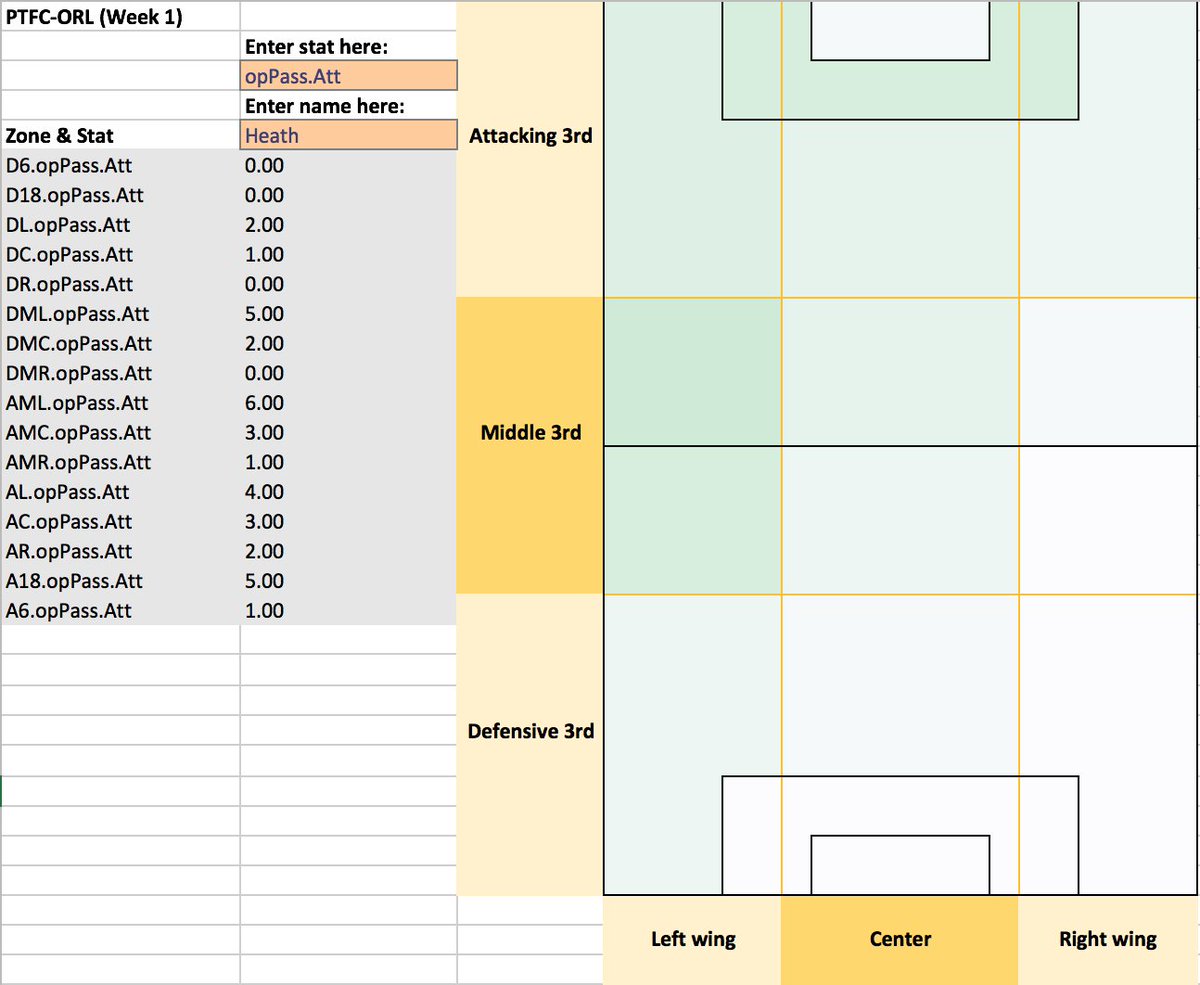 There weren’t a lot of players who had that much green in the opponent’s half. The only other player who comes close to that many attempted passes was Alex Morgan, shown below. 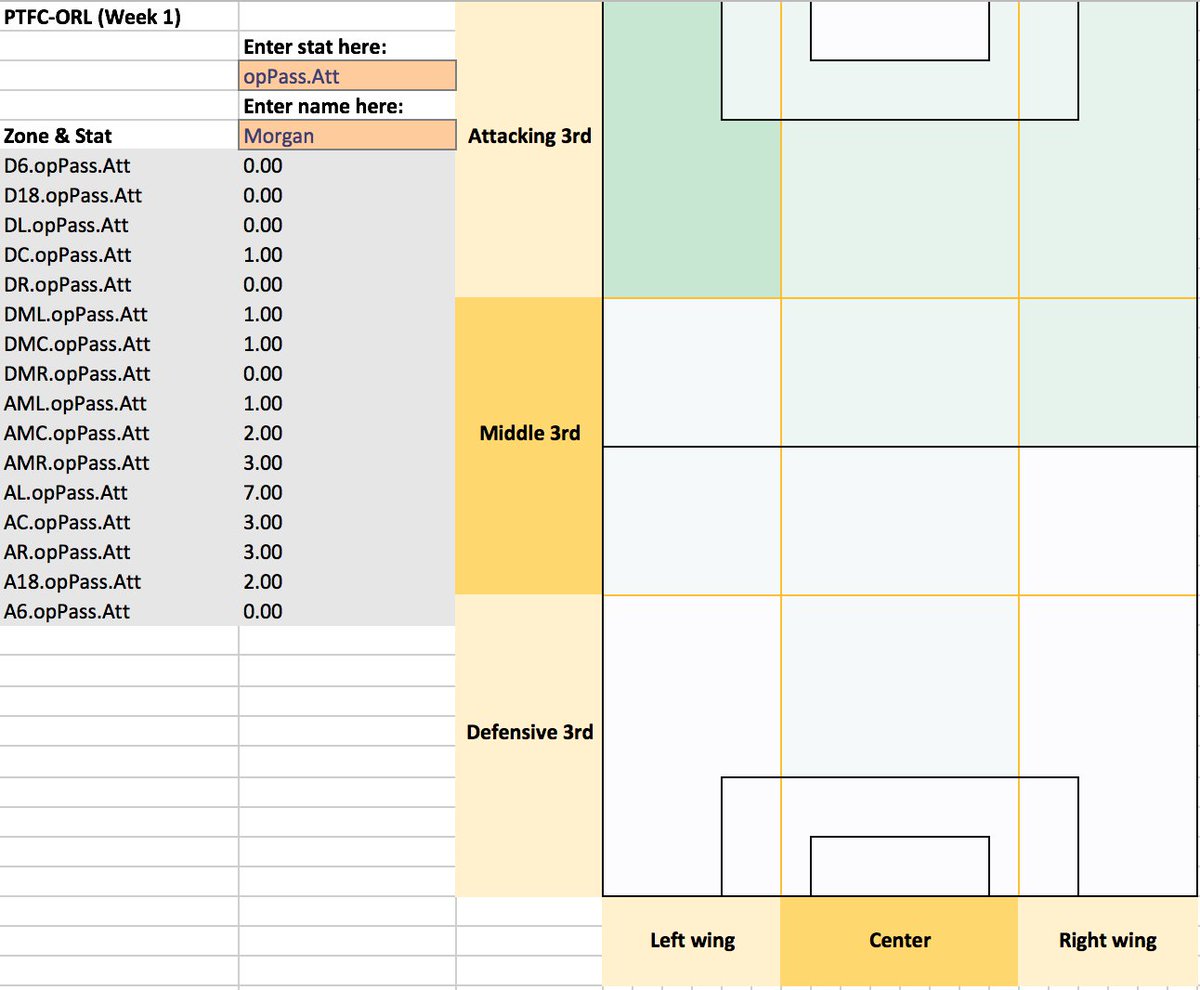 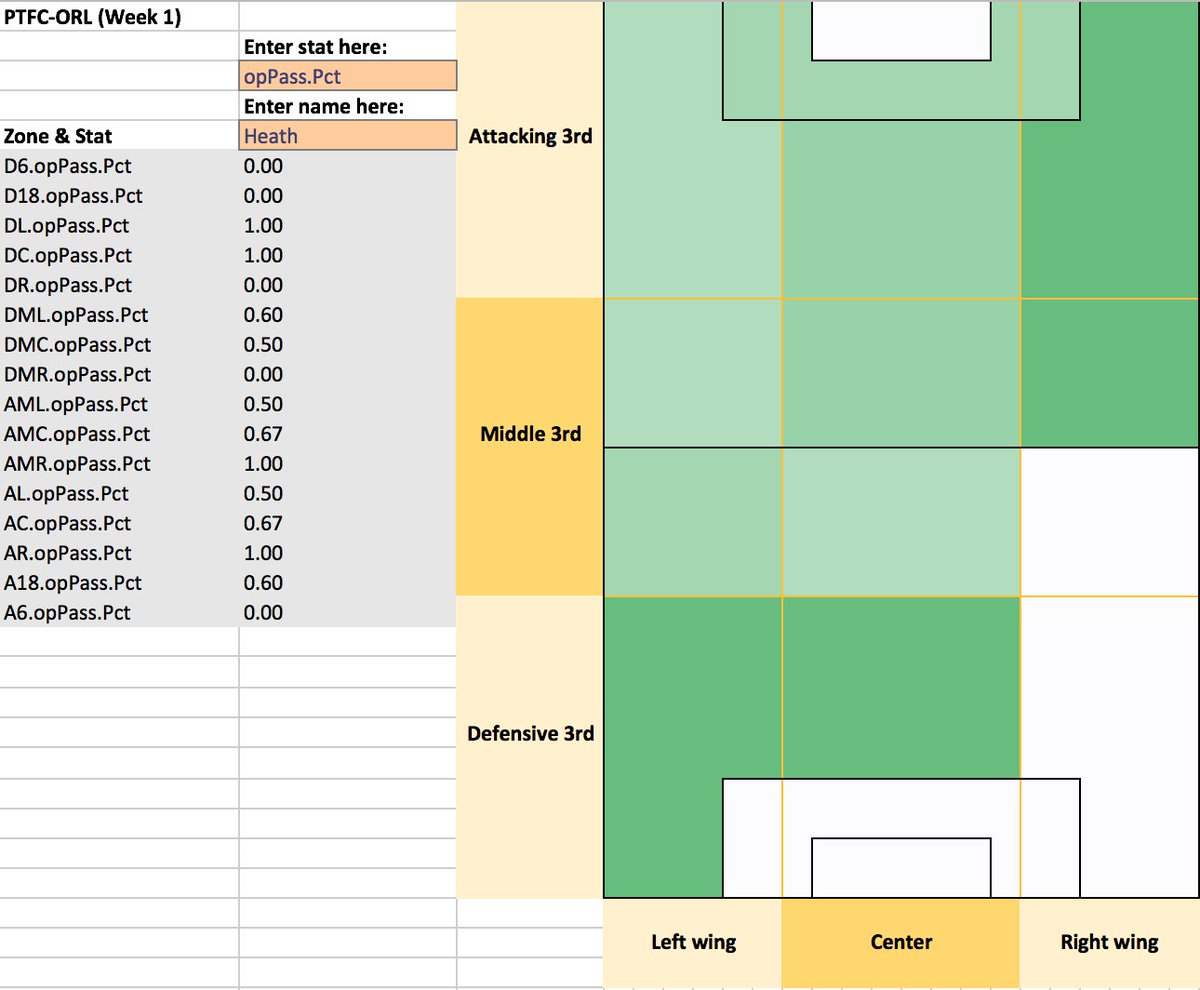 Heath’s heat map for her take ons won is noteworthy because, after looking at the heat map for her entire team, it looks like every take on won by Portland in the attacking third (5) belonged to her. 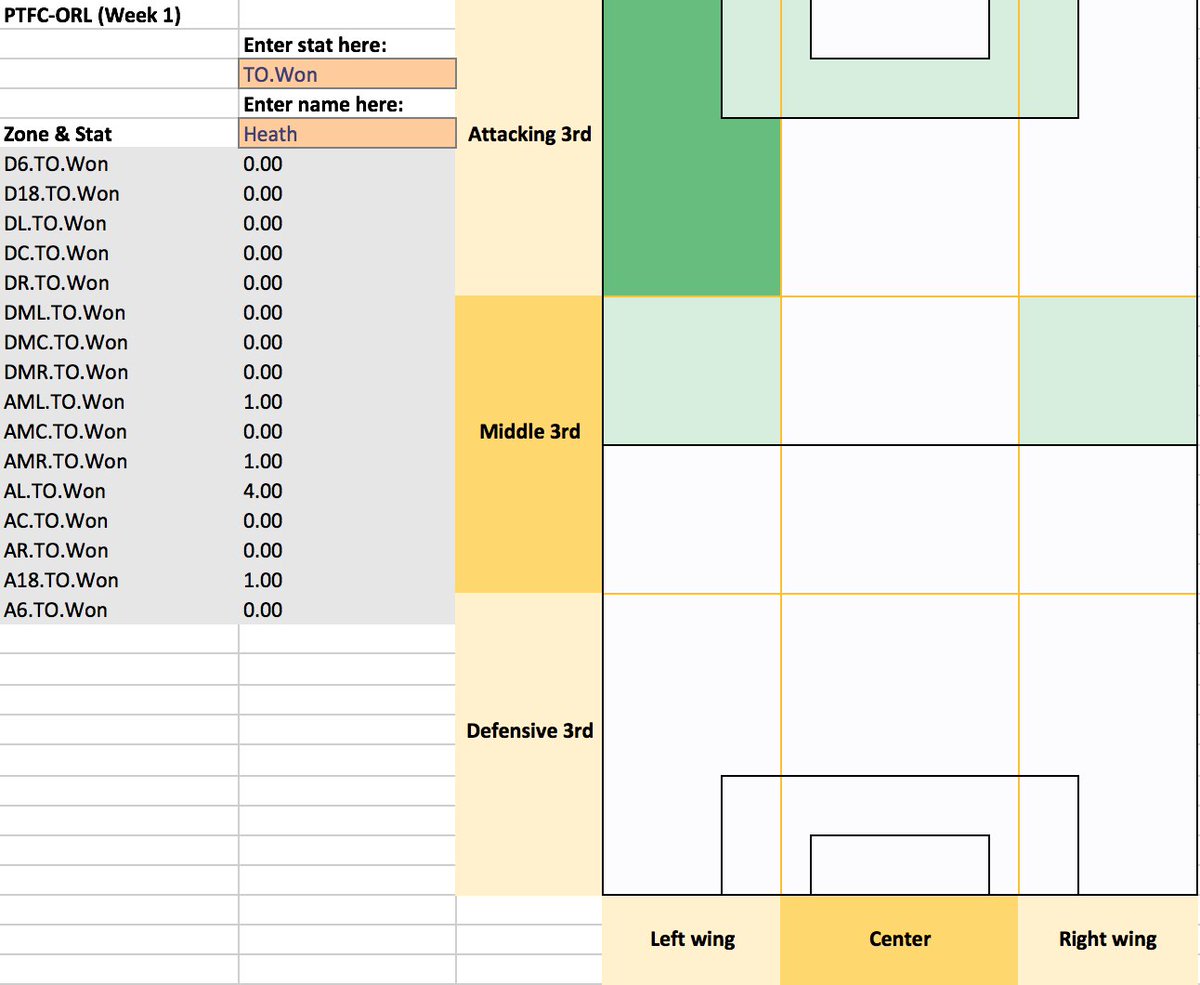 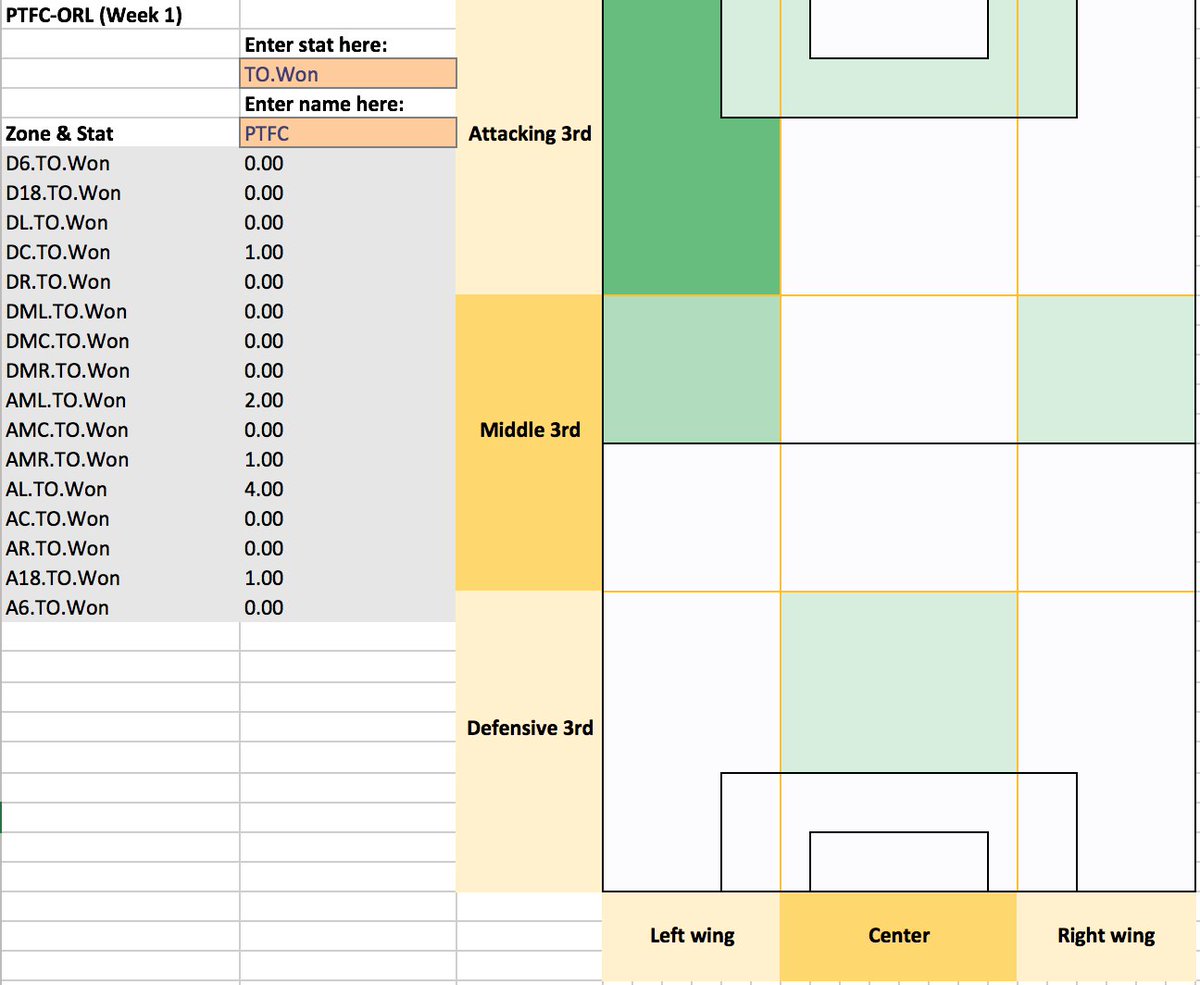 Finally, aside from her passing and playmaking ability, Heath also appears to have applied a good amount of pressure on opponents. Below, her heat map for pressure applied is fairly green up and down her left side of the field. 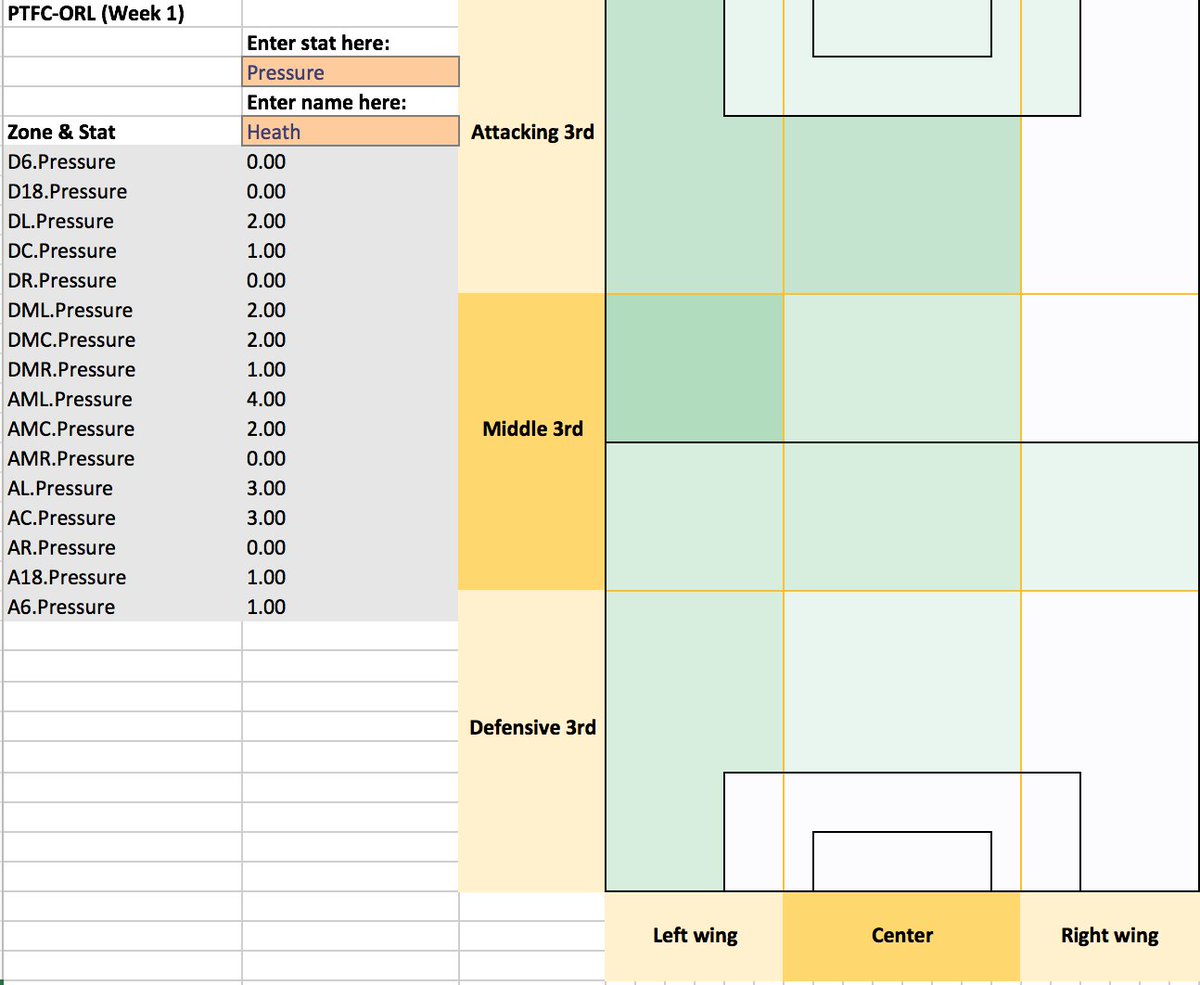 By comparison, the two players who look like they applied the most pressure in the attacking third were Portland’s Nadia Nadim and Orlando’s Alex Morgan.

Similar to her previous week, Heath had a very active passive day against FCKC in Week 2 along her left flank, with a high number of passing attempts centered around that attacking left corner. 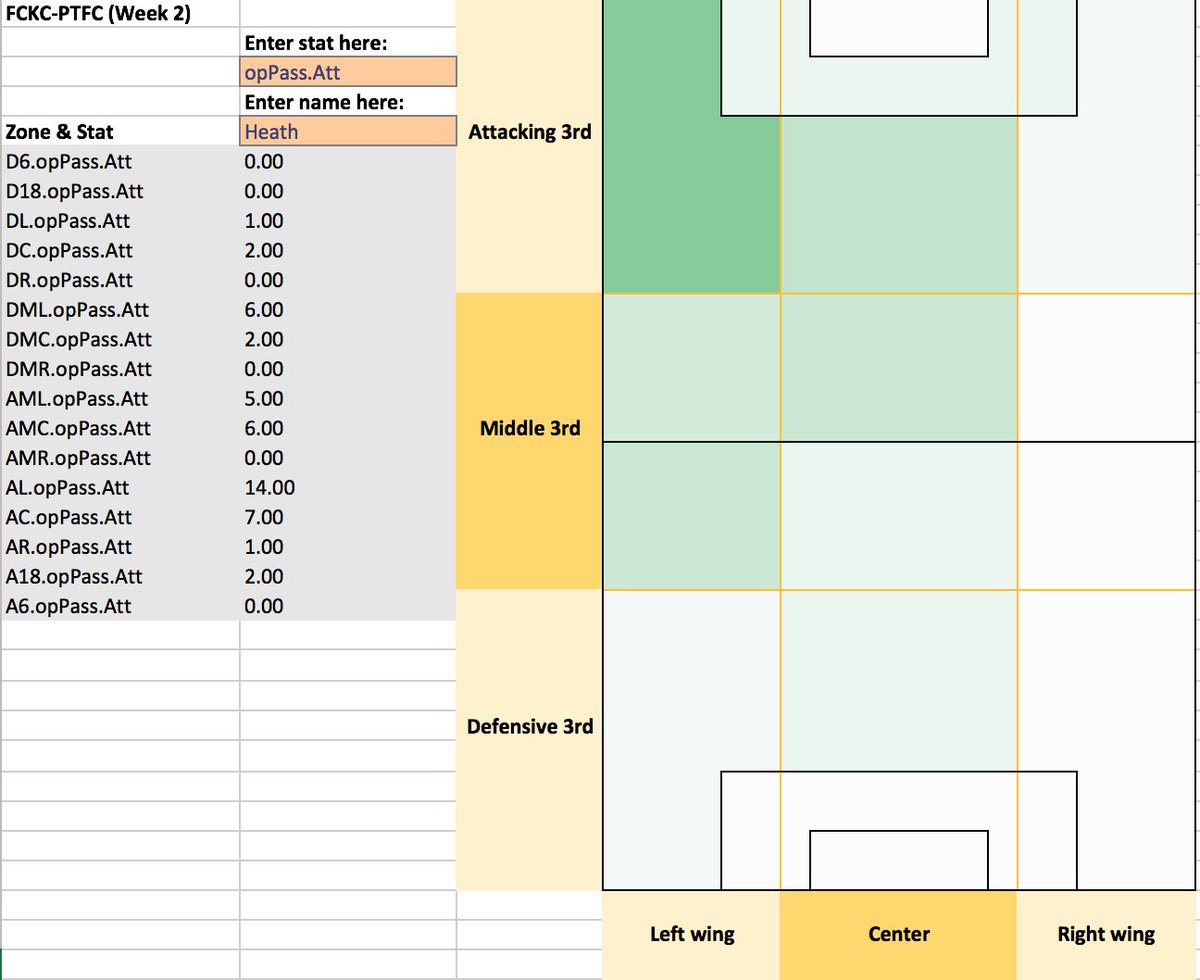 The only other player with that many passing attempts in the opponent’s left or right corner was her teammate Klingenberg. 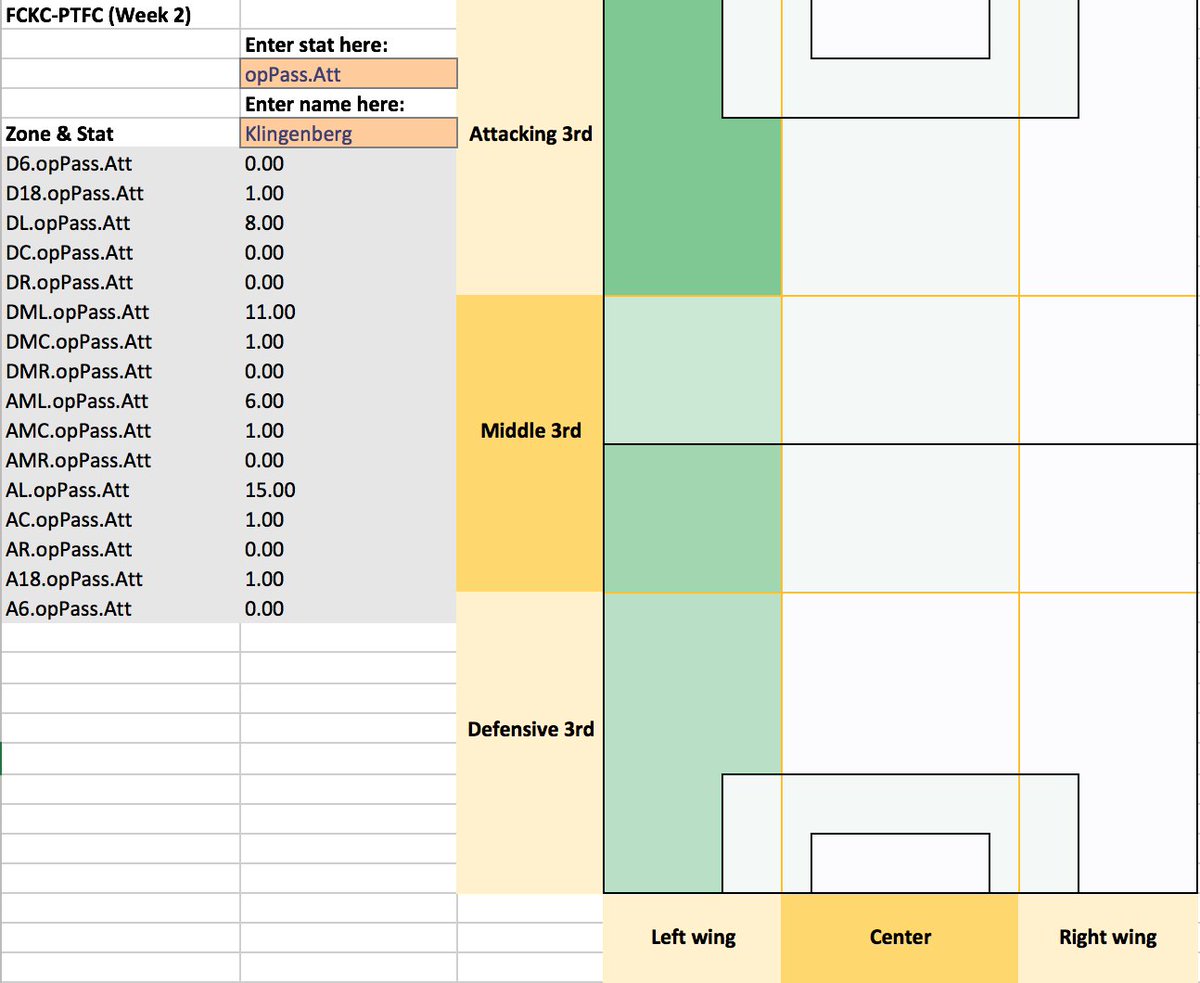 Heath’s passing completion percentage was also high across two-thirds of the field, again, especially in the attacking third. 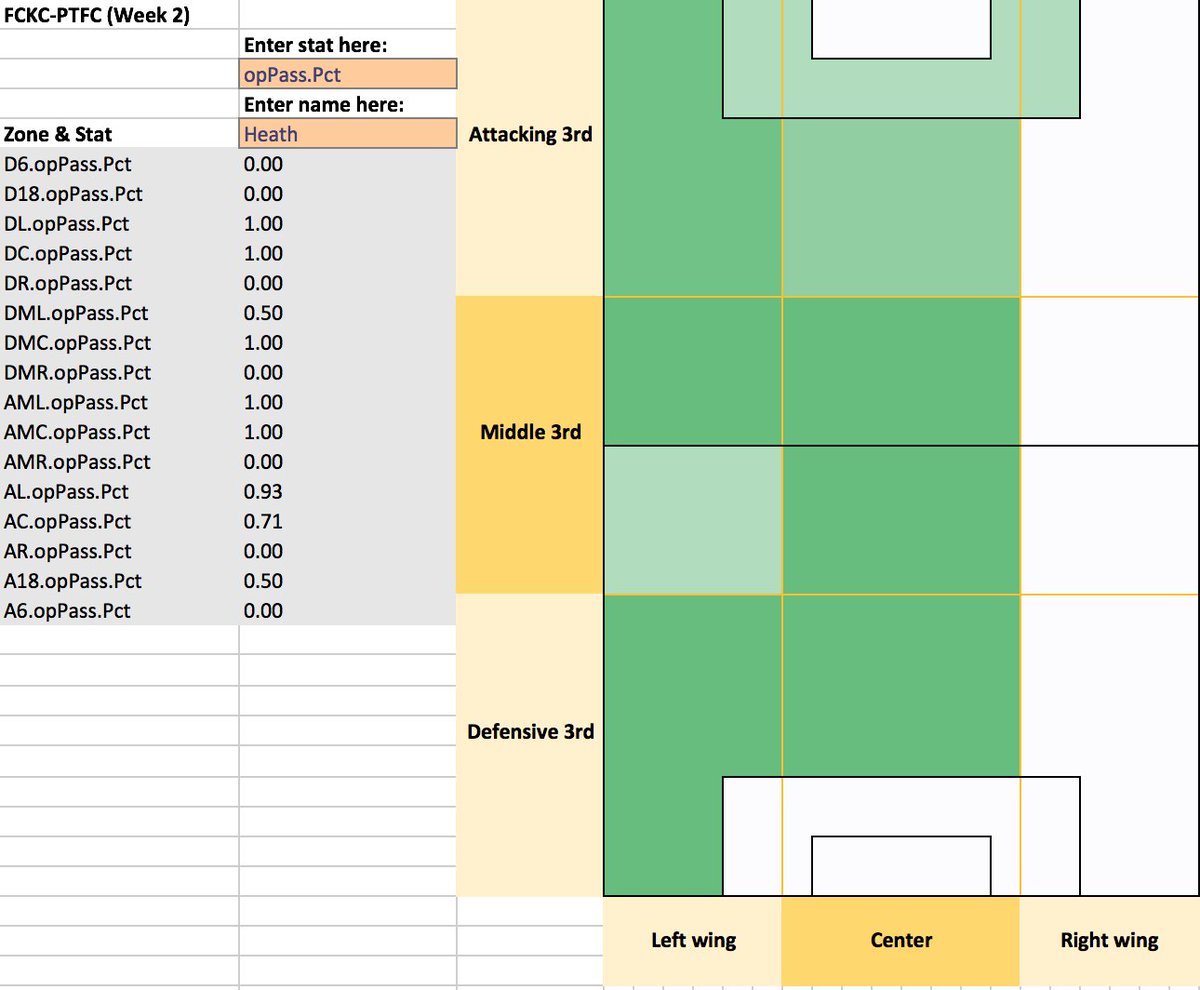 The four other players from this game who appeared to have similarly high passing completion percentage numbers in the attacking third were Erika Tymrak, Allie Long, Mandy Laddish, & Lindsey Horan.

As for take ons won, Heath won a similar amount of take ons in the opponent’s half compared to the previous week. 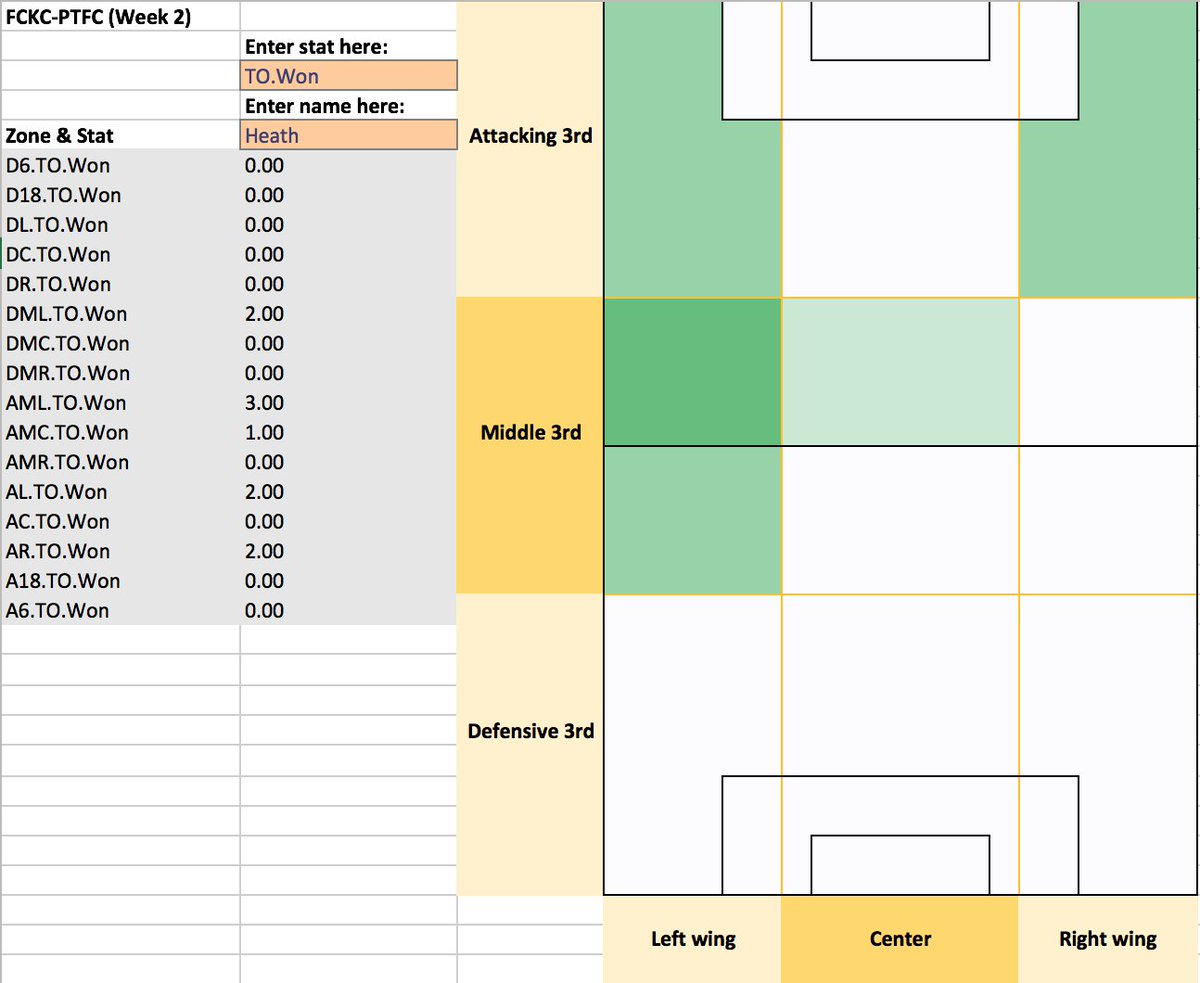 Take ons lost are worth looking at for Heath here, as it appears she lost a few more take on attempts against FCKC (5) compared to her previous week against ORL (2). 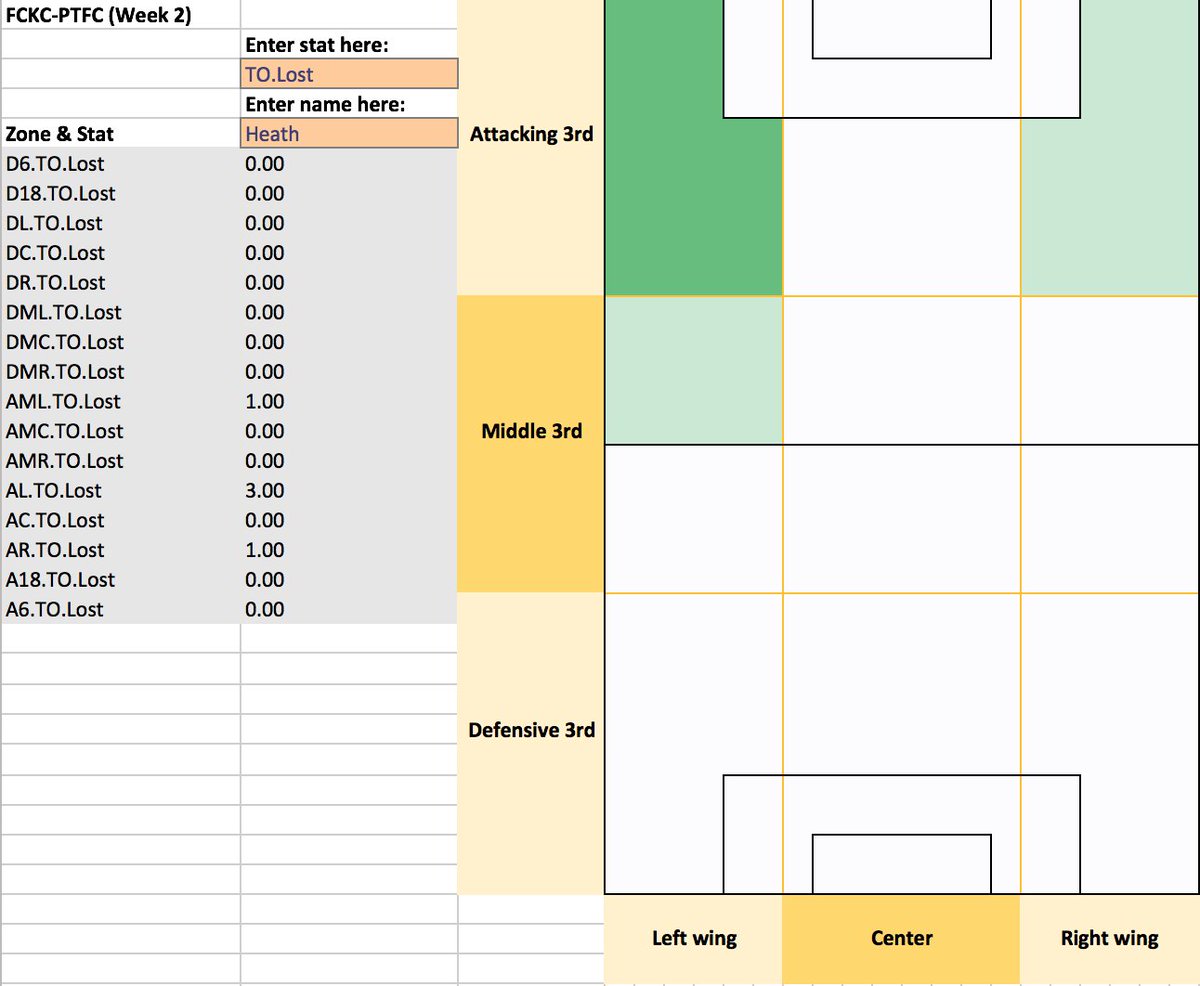 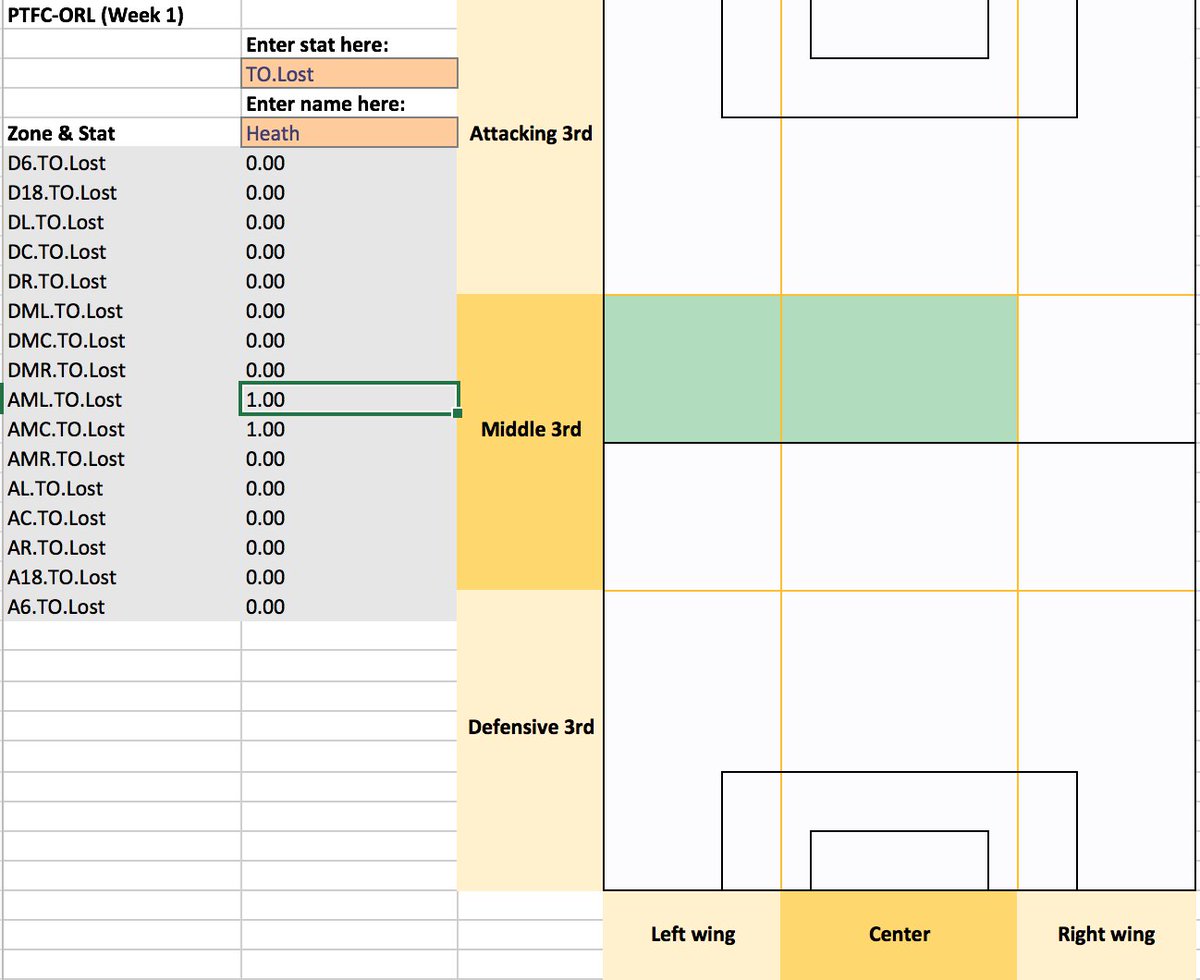 Other players that game with a similar number of take ons won in the attacking third were Meghan Klingenberg, Mandy Laddish, and Allie Long.

Two other players whose recoveries in the attacking third looked similar to Heath were Jen Buczkowski and Desiree Scott.

Heath’s pressure applied to opponent’s in their defensive corners also looked impressive, comparable to just a few other players from this game.

Finally for this (short) NWSL month, there’s Heath’s performance at Boston where she had another day of passing attempts bunched into the attacking third’s left, similar to the previous week against FCKC.

Kristie Mewis had a heat map similar to this one, with almost as many passing attempts from the attacking third left, and a few more than Heath further down the center of the field.

Compared to the rest of the month, Heath had what looks like significantly less take ons won across the field; 3 compared to 7 against Orlando and 10 against FCKC.

Heath also had the least recoveries of the month against Boston; 6 compared to 10 against Orlando and 14 against FCKC

The stats shown here appear to back up the eye test; Heath was a presence, attempting passes across a wide span of the field. She was a threat in the attacking third left, getting off a good number of passes and take ons from that corner.

There’s a lot more that could be done with heat maps, though. I included only a few stats in these heat maps because some stats I didn’t include, such as assists, happen very rarely; I found that these heat maps and the use of a color gradient are most useful and interesting for actions that happen many times such as passes or pressuring an opponent. One idea that I will pursue is creating a heat map that incorporates several matches and, rather than using totals, will use a “per 90 minutes” stat. That is, to use interceptions as an example, instead of showing how many interceptions a player got in one match (which is rarely more than one in any one zone for one match), show how often she gets an interception in that zone per 90 minutes of play.

There’s also the matter of how to account for how hard it is to rack up certain stats in some zones compared to others. For example, in the Orlando game, Heath had a fairly evenly distributed number of passes across the field. However, it may not be giving Heath enough credit by having her 5 passing attempts in the defensive middle’s left (DML) be the same shade of green as her 5 passing attempts in the opponent’s 18-yard box. I’m assuming that any one player getting that many passing attempts in the 18-yard box in any one game is rare, so that zone could reasonably be even greener if it were put up against some sort of scale that took into account what the upper and lower quartiles are for that specific zone; I’d bet if we looked at every player from that month and looked the number of passing attempts each one managed to make in the 18-yard box, Heath’s 5 would be somewhere in the top 25%. On the other side of the field, by that standard Heath’s 5 passing attempts in the defensive middle’s left would probably be an even lighter green, since that’s almost always a very active part of the field, especially for left backs, center backs, and defensive midfielders.

A more in-depth post on how this heat maps works is coming, but for now you can browse the Excel spreadsheets with the raw match actions data for each match here:
* PTFC-ORL (Week 1)
* FCKC-PTFC (Week 2)
* BOS-PTFC (Week 3)

You made it this far down the post! Maybe you can help us out a little more. We need help logging this data. This data only happens because of fans like you who have put hours of their free time into logging data onto Excel spreadsheets. But we need more people helping out. If you’re interested, read more here about how to help, and then send me a DM at Twitter at @WoSoStats or email me at wosostats.team@gmail.com to get started. All it takes is a couple of hours of your free time, a willingness to learn, and knowing a thing or two about Excel.